A Fight for Survival

As drought, water shortages and conflict put millions of lives at risk in parts of Africa, the Red Cross Red Crescent works to stop an unprecedented humanitarian tragedy from getting worse.

In Ethiopia, a plea for help

Holding her youngest daughter with one hand and carrying a 20-litre jerry can full of water with the other, Abebech Ayanu struggles under its weight to make the short walk home.

With drought conditions having shifted from northern Ethiopia to the southern district of Kindo Koysha where Abebech lives with her family, she does not want to spill a drop of this precious commodity.

“The drought has affected my family, my children, my husband. My husband went to work on the road construction as a daily labourer because there is nothing to cultivate. There is no rain and there is nothing to grow,” explains Abebech, as her cattle scour the arid ground for something to eat.

“Before we used to sow maize but since more than one year ago, there has been no rain, so no cultivation. Some of my livestock have already died. My children are now starving and there is no water.”

Like all droughts, this one has been a long time coming. According to farmers here, rains have been coming progressively later in the season for years and, in 2015, began failing altogether. Unable to sow crops, families have now used up their stockpiles of food. Having traded in his farming tools for a shovel as he works as a daily labourer on the local road construction, Abebech’s husband earns 35 Ethiopian Birr ($2.00) per day. With prices of staple food rising at the market, the money does not go far.

“To get some cereal grains from the market has become very expensive,” says Abebech. “To buy them, I want to sell my cattle but there is no market for them.” 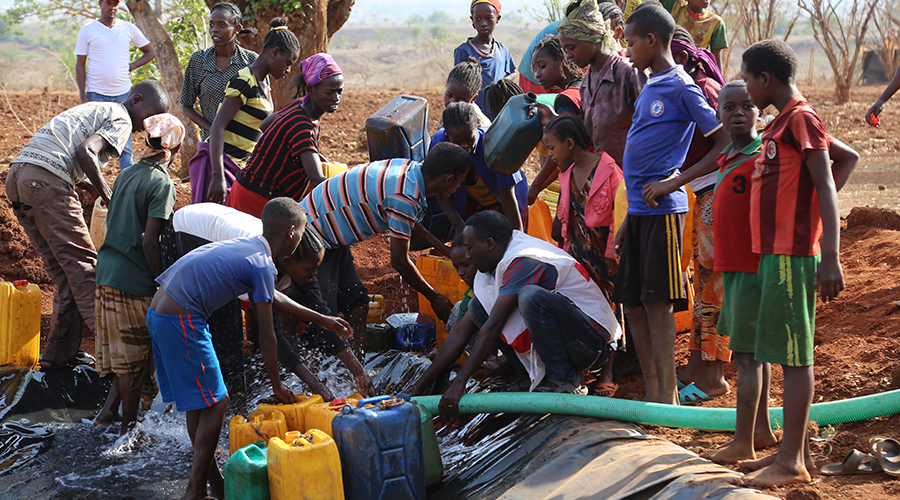 The mother of five had returned to school to complete her grade 5 but has dropped out because of the drought. Her children too, are often kept home. “The drought has affected the health of my children quite a bit. They are not able to go to school because they are tired. Even if they go, when they return, I have nothing to feed them.”

Since late February, the Ethiopian Red Cross Society has been transporting water into numerous villages, including Abebech’s. With only one truck due to limited resources, communities are reached once every four days, sometimes longer.

The Canadian Red Cross, working with the British Red Cross, in support of the Ethiopian Red Cross Society, is helping expand the distribution of emergency water through the use of three trucks to close to 29,000 people in Kindo Koysha, and installing 14 storage tanks. Prior to the start of the operation, a family of five received 40 litres of water, which they share with their livestock. As of June 12, staff and volunteers had delivered 2.22 million litres of water.

As she washes her youngest daughter – without soap as she cannot afford it – Abebech worries about not being able to provide for her family. “Sometimes I feel like I would just like to disappear from here so that I don’t see my children suffering. But I just can’t leave them. So, I pray to God to bring better times.”

In 2018, the Canadian Red Cross launched a public appeal to help support the estimated 20 million people across Africa facing devastating levels of food insecurity. This appeal was closed in January, 2019. Through the generous support of Canadians, as well as corporate and government donations, over $4.7 million was raised to support this operation.

You can support our ongoing work by donating to the Canadian Red Cross.

Since 2015, failed rains, combined with the El Nino weather phenomenon in 2016, have resulted in almost every part of Ethiopia experiencing below average rainfall.

The drought has now shifted from the north to the south and southeast, with an estimated 7.78 million people in need of emergency humanitarian support.

Farmers have not been able to sow their crops, their livestock, upon which they rely for their livelihoods, are dying, and food stockpiles have been depleted.

Since late February, the Ethiopian Red Cross Society has been trucking in water to several communities in the district of Kindo Koysha. What started as a plan to assist 8 kebeles (collection of villages), quickly jumped to 16 as the needs increased. As of June 12, Ethiopia Red Cross Society had distributed 2.22 million litres of water.

The Canadian Red Cross, working with the British Red Cross, in support of the Ethiopian Red Cross Society, has launched a six-month project (through October 2017) to expand the provision of emergency water using three trucks to reach 29,000 people in 16 kebeles. Fourteen water storage tanks will also be installed; fodder and medication will be provided to approximately 175,000 livestock to prevent deaths and disease.

A crisis of this magnitude demands a massive response.

Drawing on unique mandates under International Humanitarian Law, the Red Cross and Red Crescent has been able to foster trust with parties to various conflicts that are at the heart of some of these crises. That trust, along activating deep community networks, means the Red Cross is able to access the most vulnerable.

A significant portion of affected people are in communities that are difficult to access, because they are cut off by conflict, are isolated from government services, or are in areas that are otherwise hard to reach. These communities are also to be amongst those the Red Cross is targeting.

The Red Cross does not just work where it is easy, where the risks are lowest, where others are already present; the Red Cross works in the last mile.

The last mile is where people in remote communities suffer with destitution, exclusion and insecurity, where people are struggling to cope with little or no access to a minimum of life-saving goods and services.

Being there, when it matters most

Addressing a deadly outbreak in the middle of a food crisis

They shuffle across the dirt threshold. The older ones lean on others for support. Some are too weak to walk and are transported in on a mattress by a team of concerned relatives. Younger children are carried, limp and listless in the arms of their worried parents. All in obvious signs of distress.

They do not know what’s wrong with them. They only hope the medical staff of the Canadian Red Cross Health Emergency Response Unit (ERU) can help them feel better. 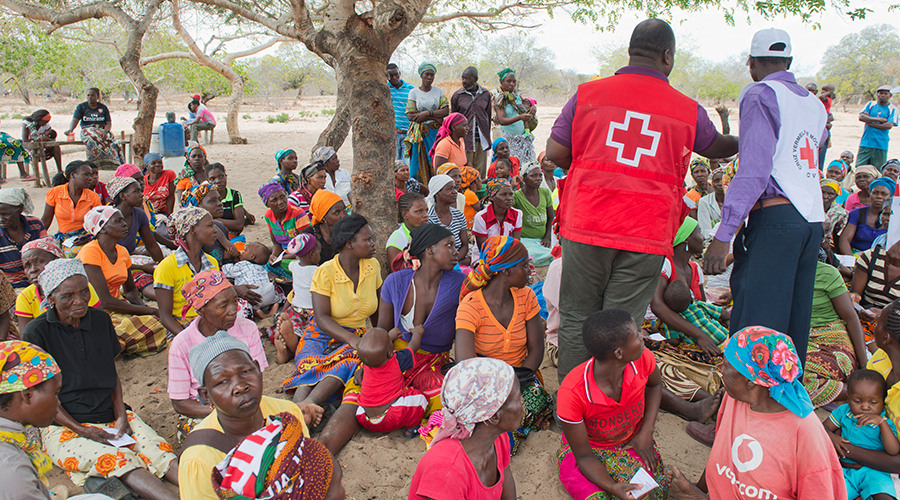 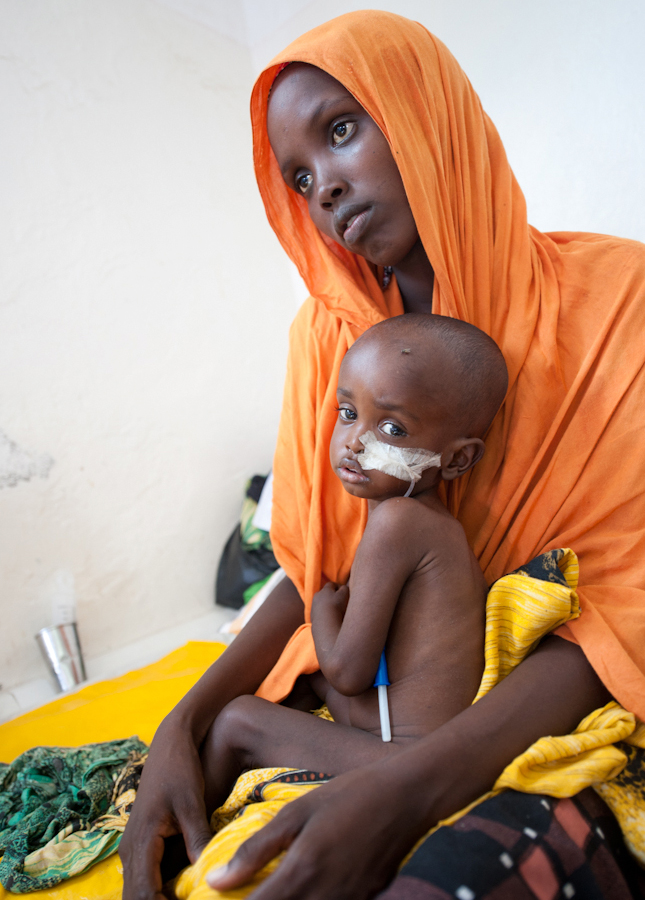 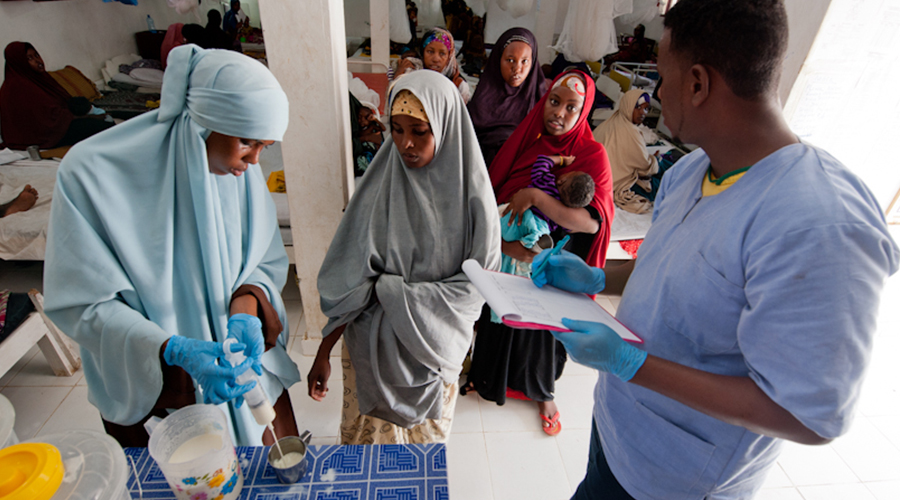 Severe food insecurity and the threat of famine in the horn of Africa have placed tens of millions of men, women and children on the cusp of an unprecedented humanitarian catastrophe. Drought doesn’t just cause thirst, hunger and death – it also causes diseases to spread. People suffering from malnutrition are far more vulnerable to infection, and are more likely to die from preventable diseases.

With support from the Government of Canada, the ERU has established a treatment centre to help manage an outbreak of acute watery diarrhea/cholera that has seen tens of thousands of people affected.

With lab tests not possible, medical staff rely on their experience and know-how to determine which treatment is best suited to each patient.

The treatment centre was set up originally to house 60 patients, divided between four large tents. However, patient flow is higher than expected. More tents and cots are added, filling quickly with children needing medical attention. As of June 16, more than 2,800 people have been seen.

“It’s not important that we are working in tents and not the sterile environment of a Canadian hospital,” explains Laginskie. “Regardless of where we are, the one thing that doesn’t change is the level of care we provide to people who are so desperately in need of someone to tell them, ‘It’s okay. We are here. We are going to help you.’ ”

In each country, a unique situation

Nearly three decades of conflict have left the population extremely vulnerable to the occurrence of what happen to be regular climatic shocks in Somalia (drought and floods). However, these climate shocks are now happening much more frequently than in the past, resulting in the inability of the population to recover.

Only six years after a devastating acute food crisis that led to the death of more than a quarter of a million people, half of them children, the current severe drought, stemming from two consecutive seasons of poor rainfall, threatens to have similar humanitarian consequences.

How is the Red Cross Helping Somalia?

Years of armed conflict have resulted in a collapsing economy, with large-scale displacement, loss of agriculture and livestock, massive inflation, rising food prices, and widespread hunger.

Conflict has displaced more than 3 million people in the last 3 years. The root causes are not climatic and must be addressed by the parties to the conflict. Otherwise, things will continue to spiral downwards.

How is the Red Cross Helping South Sudan?

Northern and parts of coastal Kenya are severely affected by recurrent drought.

The lack of rainfall, which has led to crop failure and livestock deaths, has doubled the number of Kenyans living without adequate food supplies from 1.6 million to 2.7 million in just six months.

The Kenyan government has declared a national emergency and has asked for international support.

On top of food shortages, Kenya has been affected by outbreaks of cholera – a potentially fatal disease – over the last two years.

How is the Red Cross Helping Kenya?

After years of conflict, severe food shortages are now a reality for more than four million people in north-eastern Nigeria.

The conflict has uprooted more than two million as people move in search of safety and food, both within Nigeria and across borders in the region surrounding Lake Chad.

Around 90 per cent of those have found shelter with host communities that are among the poorest in the world.

This has placed great pressure on already weak infrastructure and resources, giving way to disease and food shortages.

How is the Red Cross Helping Nigeria?

Sign up to receive communications from the Red Cross that will keep you up to date with our work.